We are pleased to announce our Special Guests for 2022! Mr. Brown started playing games at 5 with his Uncle Dave every day after school. He first played Chess and then moved on to Feudal and Thinking Man’s Golf. By the age of 7, his older brother Shad had caught the full bug for D&D and the two played role playing games with their close friends Ryan and Dwayne for the next 10 years. At 12, he was consumed by the Gamemaster series of games by MB, mostly Axis and Allies but also Conquest of the Empire, Broadsides, and Fortress America (still to this day, his favorite — thanks Mike Gray!).

After spending a year developing the game Teraforming (while recovering from knee surgery) Sean attended his first Gencon to sell the game and landed a job with Eagle Games doing demos. He later helped to build a distribution network (FRED) and continued developing and distributing games for Eagle Games.

With Mr. B Games Sean has utilized Kickstarter to provide the financial backing to fulfill his lifelong dream of running his own game company. His current offerings are Alien Uprising, Spurs, Realm of Heroes, Clockwork Kingdom, Posthuman, WarQuest, Prospectus and Helionox. 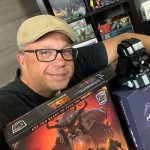 Since his early days documenting Star Wars, Star Trek and Back to the Future for Fan Clubs, Inc. as staff photographer, Mark Streed has had a strong interest in games of all types. 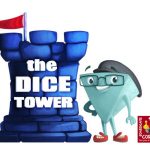 When the opportunity came up to write reviews for early LucasArts video games, Mark knew he was hooked. From then on, his free timewas spent playing and critiquing games of all sorts, or brushing up on his other passion – computer graphics and web design, soon to become his main career; Mark spent more than 2 decades in the warm glow of the CRT, as professional web designer for WireStone. Board game and computer skillseventually merged, delivering Mark to the doorstep of The Dice Tower, where he co-founded “Board Game Corner”, creating review and preview videos. Master Streed, now half the man he used to be, is currently the main prototype and Kickstarter video producer for the Dice Tower and has contributed many hundreds of such videos to the channel since joining in 2014.