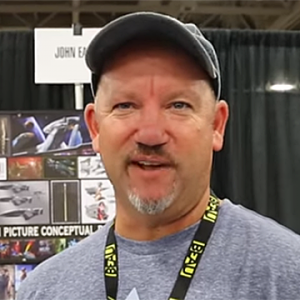 John Eaves is a concept designer for the motion picture and television industry. He started his career 1985 working as a model maker for the legendary Apogee VFX company. He followed-up that experience with work on Top Gun and SpaceBalls. Throughout the next decade he worked at many different visual effects studios including Boss Films, ILM, DreamQuest images, fantasy II, Robert Short productions, Stan Winston Studios, Grant McCune Design, and USFX.

In the 1990’s when computer graphics began to take the projects from the practical effects companies, John made the transition to finding work in studio art departments. Two of the shows he worked on during that time were SeaQuest DSV and Star Trek DS9. Last year he celebrated 30 years working on Star Trek and 10 years working on Marvel films.

He relates that working in movies and TV is what he has always wanted to do and it has never lost its magic. Every project offers new opportunities and things to learn. Most recently, he has added prop designs to his art repertoire, which he finds very exciting

John will be attending the entire weekend of StarFest, including our Meet and Greet on Friday.