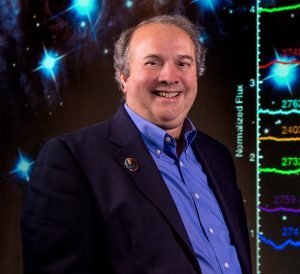 Dr. Kenneth Carpenter is currently the Hubble Space Telescope (HST) Operations Project Scientist and the Ground Systems Scientist for the Roman Space Telescope (RST) and is a member of the “Exoplanets and Stellar Astrophysics Laboratory” at NASA’s Goddard Space Flight Center in Greenbelt, MD. He enjoys photography and is an enthusiastic fan of exploration of the Universe in which we live, the Maryland RenFest, and all things Trek and Disney. Carpenter credits NASA’s early space program, Star Trek and the 1964-’65 New York World’s Fair, which he attended as a child, with fueling his desire to work for NASA. He has been a speaker at various Star Trek and media cons, including Denver StarFest, Maryland’s Shore Leave, and Atlanta’s DragonCon.

He recently was part of the team that discovered the farthest star ever discovered. You can view his interview at https://www.foxla.com/video/1052345?fbclid=IwAR0J_nsrg9GzGAwHD0zyN-lBhmWCSiPYxitKk1pcLzofZnFqNahBeY8XmN8

Dr. Ken will be offering two talks and informal meetups at StarFest 2022.