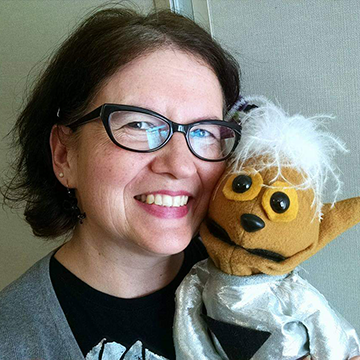 Stephanie Mihm, The First Lady of The Mihmiverse, made her first appearance in her husband’s films in 2007’s It Came From Another World!, as the Church Lady organist in the end credits. She now does a little bit of everything for Saint Euphoria Pictures. Her IMDb credits include costumer, producer, casting, and actor. You can currently see her in the title role of the just released Mihmiverse film, Queen of Snakes. She also can be seen in several other Mihmiverse movies playing a wide variety of roles, including (but not limited to) the High Priestess of Mars, scientist Rosemary Bennett/Jackson, astronauts Drs. Rutherford and Elliott and a myriad of monsters, mutants and scary creatures. Stephanie also lends her talents to help create props, design & build sets and provides voiceover work. When she's not acting as writer/director Christopher R. Mihm’s “Girl Friday,” she is a highly qualified elementary school Special Education teacher.