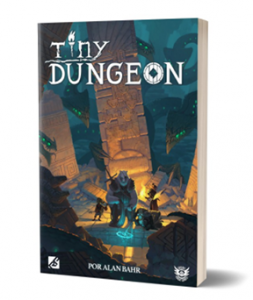 The party approached the door carefully. The wizard adjusted his robes as he lifted Captain America’s shield and readied his spell. The Fighter readied his laser rifle as the barbarian adjusted a stormtrooper helmet on his head and then prepared to kick the door in. They were about to breach the door to the tavern. The crazed Goblin, had hung a sign, written with red paint in choppy script that read “De Blu Dragun IN.” They kicked the door down and charged into the building, confronted by low lighting and the vision of a Blue Dragon sleeping in the corner… until the Door behind them slammed shut.

Every year, Prizax the Goblin sorcerer kidnaps a large group of adventurers and puts them into his maniacal dungeon. After many battles and traps those who dare to enter find treasure from across the Multimedia Verse. Final battles have been known to be against dragons or drunken giants… or even worse, Disney lawyers. Tiny Dungeon is a fast-paced adventure from the crazed mind of Prizax the Goblin Sorcerer and presented by his twisted Minions who run the game.

Does the chance to win Glory intrigue? What about laughing at your companion dying an absurd death? Do you want to be Ganduff the Grey wielding Han Solo’s blaster? How about Legoless wearing Malcom Reynolds Brown coat? Maybe Gimily holding Mjölnir (we’ll even laugh with you when you call it Mew-Mew)? Then Tiny Dungeon is for you. Can you solve the riddles and puzzles that Prizax presents and be the sole survivor to Tiny Dungeon? Bring your best tactics, clever thinking, knowledge of riddles, knowledge of fandom, and your Meta Game and come defeat Prizax… or at least his dungeon for this year.

Tiny Dungeon is back! Which of you adventurers are brave enough to see what our Dungeon Masters have in store for you this year at Gamefest?

Gamefest at Starfest is more than a gameroom. Play-to-win prizes, guest designers and publishers and special events that you normally don’t get to experience at your home table are there for you. Come see the latest games and some classics to boot. The tiny dungeon is a tradition for Gamefest where you get to try your luck at role playing through some of the most impossible situations and riddles. There are life potions and luck potions to help you on your way. Tiny dungeon is just one of the many role-playing opportunities coming your way at Gamefest 2022!